Blog Tour and Giveaway : Getting Rowdy by Lori Foster 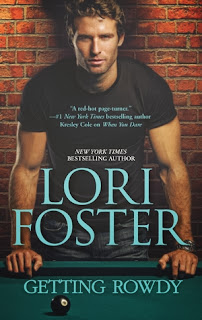 Getting Rowdy by Lori Foster
Received from Harlequin HQN
On Shelves Now
Reviewed by:  Middle Sis Jenn
The Sisters Say:  Steamy, Thrilling, and Oh So Rowdy! (For Mature Audiences ONLY)
An alpha hero's attraction to the one woman he can't have could draw him into a killer's snare in the sizzling new novel from New York Times bestselling author Lori Foster

Charismatic bar owner Rowdy Yates isn’t the kind of man women say no to. So when he approaches waitress Avery Mullins, he fully expects to get her number. However, the elusive beauty has her reasons for keeping her distance—including a past that might come back to haunt them both.

Avery spends her nights working for tips… and trying to forget the secret Rowdy is determined to unearth. But when history threatens to repeat itself, Avery grows to rely on Rowdy’s protective presence. As the sparks between them ignite, she will be forced to choose between the security she’s finally found… and the passion she’s always wanted..


The wait is over!  I’ve been craving Rowdy’s story since the first book in the series, and Lori Foster came through with a sizzling sweet story. Ever since Rowdy threw his first punch, readers have been panting over his hot body and his protective streak, yet our hearts have broken for Rowdy, the abused little boy. Well, in Getting Rowdy, also the name of his bar as well as the novel, Rowdy is still fighting—fighting unruly bar patrons, fighting for unloved children, fighting to protect his sister, but now he is in for his toughest fight of all—fighting falling in love with Avery.


Avery is Rowdy’s sexy, red-haired bartender. Tiny and tough, a perfect combination for any heroine! But she’s witnessed Rowdy’s one night stands and she doesn’t want to be another conquest, shuffled out the door before the night is over. But when it comes to Avery, Rowdy has little patience, which makes for some wonderful humor in the plot. Through Rowdy’s frustration, Foster creates some adorable scenes, leaving us laughing and sighing in sympathy for the poor guy
.


But like all Foster reads, suspense soon creeps in and we find ourselves on a tilt-a-whirl, with our hearts racing in tune with the characters. Avery has a past—a past that has found her. Now choices have to be made—choices between family and survival.


Foster is a master creator of characters, and she has added two to the Love Undercover family.  First, Marcus is an 8-yr-old rescue, a touching parallel to Rowdy, who steals our hearts as well as Rowdy’s.  The scenes designed to reach the hidden demons of this mistreated child will have you wanting to run out to adopt an unwanted child.


Cannon Colter also joins this tight knit group. Foster leaves some mystery surrounding this hunk, who at first seems to be another punk gang member hanging around the neighborhood late at night up to no good. Yet, when Rowdy offers him money to keep an eye on Avery, he refuses—the money that is. He’s fine with watching Avery as well as every other innocent in the area.  He even takes a job at Rowdy’s bar so that he can keep a closer eye on happenings. Yes, we have another tarnished Knight to add to the mix, and I am definitely hoping Foster is planning Cannon’s story!


Finally, Dash, Logan’s brother, makes a return appearance, another hottie who owns his own construction company. Just because he isn’t in law enforcement doesn’t mean he isn’t involved; in fact, Foster sets up the action for Dash’s story with a little undercover action with Lieutenant Margaret, a co-worker with Logan and Reese. All I can say is my Foster fix won’t last and I’m back to waiting for another Love Undercover story!
**********************************
a Rafflecopter giveaway
Posted by Jennifer @ YA Sisterhood at 1:20 PM