Not So YA Friday: Levitating Las Vegas by Jennifer Echols 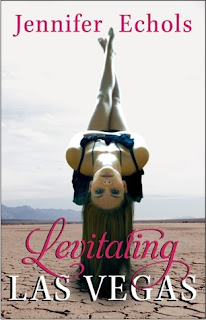 Levitating Las Vegas by Jennifer Echols
eARC received from Simon & Schuster via Edelweiss
Release Date:  5-7-2013
Reviewed by:  Middle Sis Jenn
The Sisters Say:  The magic and power of Las Vegas in a book!


My first Jennifer Echols book was Such A Rush, and I loved it; so when I saw her new NA novel up on Edelweiss, I knew I wanted to read it.  Yay for being approved!  I loved Jennifer’s world—full of misdirection and treachery, love and passion, danger and adventure; and like in the real world, what happen’s in Jennifer’s Vegas is supposed to “stay in Vegas.”


This book is told in 3rd person, which was a bit weird for me at first because it would pop back and forth between scenes and I had to do a double-take to see which character we were following at that point.  I only had this issue with Chapter 1, though, so I think with a few minor edits, it would flow much better.  As for the rest of the book, the writing and switching scenes/characters was smooth and definitely interesting as we see the magic of Vegas from multiple angles.


I really enjoyed the paranormal aspect of this book—seeing how powers could control people’s lives and cause them to do insane and dangerous things was thrilling, and I am really hoping that Jennifer writes a companion novel because I want to find out what’s next.  Holly is beautiful, charming, and innocent in her own way, and when she discovers that her powers are not a delusion, we see an entirely new side start to appear.  I really felt like this wasn’t just a story of magic and love, but a story of self-discovery as Holly had to decide how to weave her magic into her life without letting it take control.


Elijah is such a great love interest in this story.  He’s powerful in his own right, but his powers are also incredibly dangerous for himself.  As his powers evolve, he starts to feel himself teetering on the edge; and his struggle to maintain control of his life was empowering and emotional.  I really felt for him, and  I was cheering him and Holly on in their road of discovery.  Plus, he’s protective and hot—which I love!  Their romance was sweet and romantic, and while the scenes are still 18+, they aren’t overly sexual as many adult novels.


Kaylee, Holly’s best friend, did annoy me at times.  She was very strong-willed and often callous in the face of danger.  I understand that she needed to be this way to protect everyone’s secret, but I wanted to feel like she was a person, too, not just the person who fixes all the problems.  You see a bit more of her soft side show through at the end, so that was a nice break.  Jennifer also says she is hoping to writing a companion novel on Kaylee, so hopefully we will see her as a bit more relatable in that one.


I really enjoyed the minor characters in this world, too.  Shane, Elijah’s roommate who has a major crush on Kaylee is hilarious, and I fell for him the moment I met him.  He was fun and sweet, but still had an edgier side to him.  I can’t wait to see more.  Then there’s Rob, the jerkwad.  I hated him, but his character was well-written, and the scenes with him really made me run the gamut of emotions.  Add those characters to Holly’s crazy parents, and I promise , you will see this rainbow of characters as amusing and emotion-charged as I did.


This world was powerful and enigmatic, and the magic really brought the setting and the world to life.  Don’t miss out on this new paranormal NA—it will really lift you off your feet!  J
Posted by Jennifer @ YA Sisterhood at 12:01 AM