Not So YA Friday: Tempting Acquisitions by Addison Fox 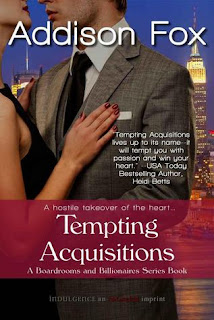 
Tempting Acquisitions employs one of my favorite romance paradigms—the enemies who fall in love.  I just love stories where two people fight and fight, throwing sharp words and steely glances at each other; but then are inextricably attracted to each and can’t seem to get passed those feelings.  The tension builds and builds until it explodes into something fiery and passionate.  Best Paradigm Ever.


Keira is a strong-willed, beautiful CEO of a media empire, and Nathan is the gorgeous, cold-hearted man who is determined to take over her company.   I really like when the female MC is stubborn and confident, knowing she is both talented and beautiful.  I like this in a romance story because it gives the female some power that she can use to twirl the guy around her finger.  Keira is that woman, and I really enjoyed watching her confidence as she managed her company and Nathan.  However, there were vulnerabilities there that didn’t make her too strong, giving Nathan the chance to swoop in and make her stumble just a bit.  This made for some great romance scenes!


Nathan was a type of alpha male—not the type you see in romantic suspense novels where he can take out a guy with one punch, but the kind that sees what he wants and doesn’t let anything get in his way.  I enjoyed Nathan’s confidence and bantering, and I really like it when a guy is so “confident” that he just knows he’s going to get the girl (and says so out loud multiple times).  It might seem conceited to people, but I just fall for those guys!  I like them strong and determined, and Nathan was definitely that!


While I really enjoyed the characters that Addison created, the story itself felt a bit rushed in the romance department.  I just felt, with the circumstances the way they were, a girl like Keira wouldn’t just fall straight into bed with a guy like Nathan, no matter how strong the attraction.  I think they needed more one-on-one time, meetings, dinners, etc. to cement their relationship and make their feelings more believable.  I think the “I love you’s” were really rushed, not that it couldn’t happen that fast, but their personalities just seemed to be so guarded that I don’t think they would let themselves  truly fall that quickly.


Overall, I really enjoyed this romance, and I look forward to the companion novels from Addison.  It was a quick and fun read, and the romance was steamy without going overboard.  I had been in a slump with the last few Entangled books not sitting well with me, but this one brought me out of it!
Posted by Jennifer @ YA Sisterhood at 12:01 AM

Email ThisBlogThis!Share to TwitterShare to FacebookShare to Pinterest
Labels: Addison Fox, entangled indulgence, Not So YA Day, Tempting Acquisitions
Newer Post Older Post Home
Three sisters (and some honorary ones) share a love of YA literature, review new books, and talk old favorites.