Not So YA Day: In Bed With the Opposition by Stephanie Draven

Today is "No So YA" Friday when we review a NA or Adult book!
The following book is NOT SUITABLE for those under the age of 18!!!!
﻿ 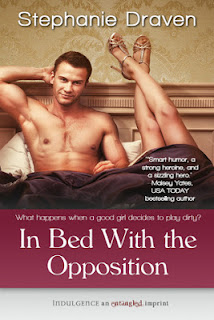 In Bed With the Opposition by Stephanie Draven
Received by Entangled Publishing
Release Date:  August 15, 2012
Reviewed by:  Middle Sis Jenn
The Sisters Say:  The kind of politics worth paying attention to!


I originally read this right before the Presidential elections, and I will say, this was the side of politics I like!  My husband is a huge political nut, so I had been hearing about the election for the past year, so it was nice to read something in the realm of politics, but with some seduction and sass!  Plus, politics wasn’t something that I have ever read about in a romance novel before, so it was a nice change of pace.


I really enjoyed Grace as the strong female main character.  She is smart and sassy, but she has a secret that has kept her from really letting loose since she was in law school.  That secret ruled her life, and as a result, she found herself missing out on the best parts of living.  Then Ethan comes sauntering back into her life with a smile that would melt your “insert whatever clothing you would like” right off, and he has his sights set on Grace.


I found myself laughing and enjoying the witty banter between Grace and Ethan.  It was like watching a sexy game of cat and mouse, only when one finally catches the other, it’s like an explosion of desire.    The steam in this one is off the charts—with scenes that you will definitely want to go back and read twice.  (No judging—this is a safe zone!)


But it’s not just the romance that makes this a fun read, it’s the relationships.  Grace and Ethan felt real, and their emotions and actions were all over the place just like ours are in real life—awkward at times, seductive at others.  Now, Grace and Ethan are not the only ones that will draw your attention in this book.  Grace is also torn because she has feelings for Blain, the Senator’s (her boss and closes thing to a father she has) grandson.  The dynamics between Grace and Blain were interesting to read about because, like the political world in real life, there is so much pressure on them.  Blain is always trying to please the public and his grandfather, with his work and his relationships.  I can’t help but think this is probably true for many political families out there.

Overall, I really enjoyed Stephanie’s look into the world of politics and romance.  It was a nice break from the normal spy or mystery or murder type of romances, and the romances that you love but know could never happen in real life.  I would definitely recommend this to lovers of contemporary romance.
Posted by Jennifer @ YA Sisterhood at 12:01 AM

Email ThisBlogThis!Share to TwitterShare to FacebookShare to Pinterest
Labels: contemporary romance, entangled publishing, In Bed With the Opposition, Not So YA Day, politics, Stephanie Draven
Newer Post Older Post Home
Three sisters (and some honorary ones) share a love of YA literature, review new books, and talk old favorites.